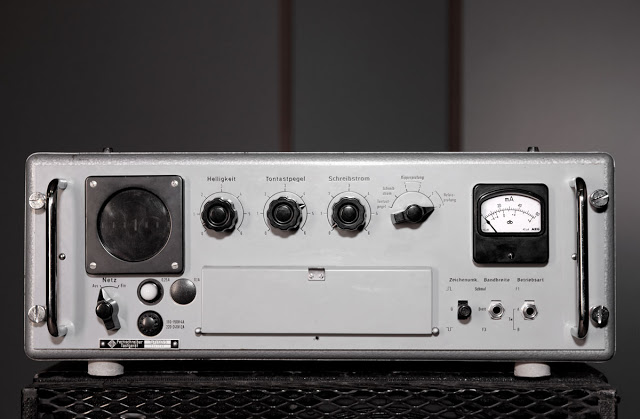 Built for Jörn Magens
This is one of those times when the case really makes the project.  No changes were made to the case because it didn’t need anything else– the knobs, the VU meter, even the “porthole” were already there.  Originally, the unit was part of a morse code testing unit.  It is a big and heavy case but that is how a proper bass amp should be!
The amplifier has 100 Watts output into 2,4 or 8 Ohm.  As Jörn was looking for an amp that would distort more easily than the usual bass amp, EL34s were chosen as they need less drive.  Also included on the front panel is a knob to control the amount of distortion: similar to a power soak but without the wasted heat, this changes the phase inverter’s bias.  Otherwise there are the normal controls of Volume, Tone and Mids.  As well, the switch next to the input lets the user choose between three different sounds– lo gain, normal gain and a parallel mode which adds a little gain while boosting the low mids somewhat.
Finally, a quick mention of the big black capacitors.  They are polypropylene and have an incredible lifespan, essentially making their replacement unnecessary.  Under normal conditions they should last well over 100,00 hours of use!  As a bonus, they make fantastic filter caps such that this is easily the quietest 100 Watt bass amp I have heard.